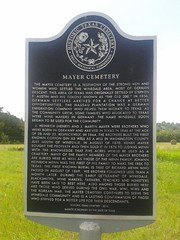 Mayer Cemetery. The Mayer Cemetery is a testimony of the strong men and women who settled the Winedale area, most of German descent. This area of Texas was originally settled by Stephen F. Austin and his colony known as “The Old 300.” In 1836, German settlers arrived for a chance at better opportunities. The Nassau Plantation was a German emigration company who helped them migrate to Texas. As the community grew, some families who relocated to Texas were wine makers in Germany. The name Winedale soon began to be used for the community. J. Heinrich (Henry) and J. Martin Mayer were brothers who were born in Germany and arrived in Texas in 1846 at the age of 28 and 23, respectively. In 1864, the brothers built the first known cotton gin as well as a mill in Washington County just south of Winedale. In August of 1870, Henry Mayer bought the property and then sold it in 1876 to Ludwig Menn with the knowledge that five acres would be used as a cemetery. Many of the family members of the Mayer brothers are buried here as well as those of the Menn family. Johann Heinrich Menn was the first of his family to make the trek to Texas. The first known burial is that of Richard Menn who passed in august of 1869. His brother followed less than a month later. During the early settlement of Winedale, blacksmiths, wine makers, farmers, teachers and ministers have been laid to rest here. Also among those buried here are those who served during the Civil War, WWI, WWII and the Korean war. The Mayer Cemetery continues to serve the Winedale community and is a lasting confirmation of those who strived for a better life for their descendants. (2010) #17267