Ian Edward Fraser, VC, DSC, RD, JP (18 December 1920 – 1 September 2008) was an English diving pioneer, sailor and recipient of the Victoria Cross, the highest award for gallantry in the face of the enemy that can be awarded to British and Commonwealth forces. Fraser was born in Ealing in Middlesex and went to school in High Wycombe. After initially working on merchant ships and serving in the Royal Naval Reserve, he joined the Royal Navy at the start of the Second World War. After being awarded the Distinguished Service Cross for actions while serving on submarines, he was placed in command of a midget submarine during an attack in Singapore codenamed Operation Struggle. For his bravery in navigating the mined waters, and successfully placing mines on a Japanese cruiser, Fraser was awarded the Victoria Cross. After retiring from the Royal Navy, Fraser set up a commercial diving organisation after realising the ease of use of new frogman-type diving equipment. After serving in several honorary positions in Wirral, Fraser retired from the Royal Naval Reserve as a lieutenant commander in 1965. He died on 1 September 2008, in Wirral, Merseyside. 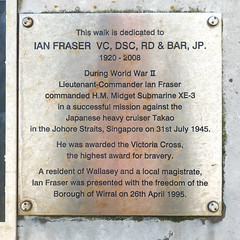 This walk is dedicated to Ian Fraser VC, DSC, RD & Bar, JP. 1920-2008 During World War II Lieutenant-Commander Ian Fraser commanded H.M. Midget Submarine XE-3 in a successful mission against the Japanese heavy cruiser Takao in the Johore Straits, Singapore on 31st July 1945. He was awarded the Victoria Cross, the highest award for bravery. A resident of Wallasey and a local magistrate, Ian Fraser was presented with the freedom of the Borough of Wirral on 26th April 1995.

Ian Fraser Walk, New Brighton, United Kingdom where they was