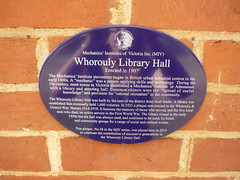 Whorouly Library Hall. Erected in 1907. The Mechanics' Institute movement began in British urban industrial centres in the early 1800s. A "mechanic" was a person applying skills and technology. During the 19th century, most towns in Victoria established a Mechanics' Institute or Athenaeum with a library and meeting hall. Common objects were the "spread of useful knowledge" and provision for "rational recreation" in the community. The Whorouly Library Hall was built by the men of the district from local bricks. A library was established that eventually held 1,600 volumes. In 1921 a plaque was erected to the Whorouly & District War Heroes 1914-1918. It honours the memory of those who served, the five local men who died on active service in the First World War. The library closed in the early 1950s but the hall was always used, and continues to be used, by locals and community groups for a range of social and cultural events.