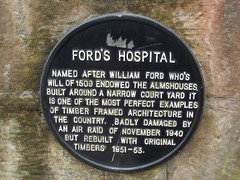 Ford's Hospital Named after William Ford who's will of 1509 endowed the almshouses. Built around a narrow court yard it is one of the most perfect examples of timber framed architecture in the country. Badly damaged by an air raid of November 1940 but rebuilt with original timbers 1951-53.