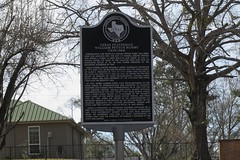 Texas Statesman William Pettus Hobby. (1878-1964) Businessman and politician William Pettus Hobby was born near this Moscow site, the son of Eudora Adeline (Pettus) and Edwin E. Hobby, a state senator and judge. At age 17, William joined the staff of the Houston Post and rose to managing editor at 23. He was named publisher of the Beaumont Enterprise in 1907. Texas voters elected William P. Hobby Lieutenant Governor in 1914 and 1916. He became Governor with the impeachment of James E. Ferguson in 1917. In 1918, Hobby was elected to his own full term (1919-1921). In 1924, he served on the first board of regents of Texas Technological College (Texas Tech). Hobby was also president of the Houston Post from 1924 until his death in 1964. In 1931, Hobby married Oveta Culp, parliamentarian of the Texas House and daughter of Elizabeth (Hoover) and former state representative Ike W. Culp. For the next quarter century, William and Oveta shared editorial administration of the Post, except four years during World War II when Oveta served as commander of the Women's Army Corps of the United States military forces, and from 1953 to 1955, when she served in the administration of President Dwight D. Eisenhower as the first Secretary of the Housing, Education and Welfare Department. William and Oveta had two children: William Pettus, Jr. and Jessica. Hobby's highlights as Governor included initiation of a free schoolbook program, compulsory school attendance law, state government budget system and state drought relief. His leadership was vital to Texas' participation in World War I and the effecting of woman's suffrage in the state and nation. (1964) #10397