place, shop, and 7 Much Park Street 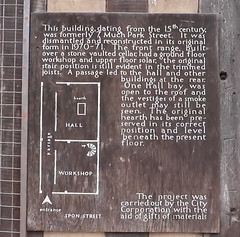 This building dating from the 15th century, was formerly 7 Much Park Street. It was dismantled and reconstructed in its original form in 1970-71. The front range, built over a stone vaulted cellar, had a ground floor workshop and upper floor solar, the original stair position is still evident in the trimmed joists. A passage led to the hall and other buildings at the rear. One hall bay was open to the roof and the vestiges of a smoke outlet may still be seen. The original hearth has been preserved in its correct position and level beneath the present floor. The project was carried out by the City Corporation with aid of gifts of materials