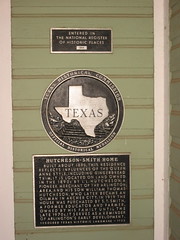 Hutcheson-Smith Home. Built about 1896, this residence reflects influences of the Queen Anne style, including gingerbread trim. It is located on land owned in the 1890s by I. L. Hutcheson, a pioneer merchant of the Arlington area, and his son William Thomas Hutcheson, who later became an oilman in Archer City. In 1919 the house was purchased by S. T. Smith, a former educator and farmer. Owned by his family until the late 1970s, it serves as a reminder of Arlington's early development. Recorded Texas Historic Landmark-1982. #2601