In memory of all those killed and injured at this site by a V2 rocket which destroyed the Crooked Billet on Sunday 19th November 1944. Not forgotten.

Our contact from the Friends of Jubilee Country Park tells us that, "since 2004, I have researched the history of the park. During the course of this research I discovered that three gunners from the heavy anti-aircraft gunsite which had occupied much of the park during the Second World War had been killed at the Crooked Billet public house on Southborough Lane, Bickley when it was hit by a V2 rocket on 19th November 1944. They had died either in the explosion or in an attempt to rescue casualties of the blast when a roof collapsed killing several members of the search party. Being service personnel, their names were not recorded on the published civilan casualty list of those who died at the Crooked Billet. Owing to the connection with Jubilee Country Park, I told the story of the V2 rocket attack on the Crooked Billet during history walks which I led in the park. It always provoked the same response. Hearing that 27 people had died & dozens more were injured, many people attending these walks queried why, over 66 years later, there was still no memorial to those involved. I therefore, with the Friends of Jubilee Country Park, made sure something was done about it. I have written a booklet about this called "Not Forgotten-the Crooked Billet" that tells the story of what happened (£4.00 plus p&p). All profits go to the work of the Friends."

by Friends of Jubilee Country Park 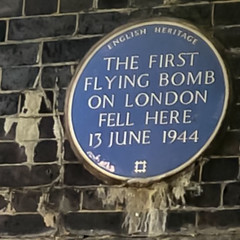 In memory of the 168 people who died and those injured in the V2 rocket attack that lan...
London, United Kingdom

In memory of the 51 people who died and the many injured as a result of the V1 rocket t...
London, United Kingdom 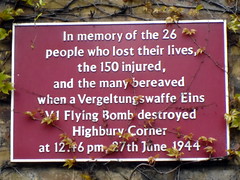