First National Bank of Jefferson. Thomas J. Rogers (1832-1918), a native of Mississippi, came to Jefferson in 1856. After serving in the Civil War, where he attained the rank of captain, he returned here and in 1868 established a mercantile business in this block. In partnership with his son Ben F. Rogers, he opened private banking facilities in the store in 1896. Eight years later the private bank received a Federal charter, as the Rogers National Bank. Following the death of his father, Ben opened the Rogers State Bank and Trust at another site in this block. It closed in 1928 and was succeeded by the Jefferson Bank and Trust. Later incorporated as the Jefferson State Bank, it remained in operation until 1932. The Commercial National Bank, started in 1907, was also located here until 1920. During the economic depression of the 1930s, the Rogers National Bank remained sound. It was one of the first institutions to reopen without a special examination after President Franklin D. Roosevelt's 1933 closing of the nation's banks. A reorganization in 1950 resulted in the formation of the First National Bank of Jefferson. The present facility, constructed on the site of the original bank, is modeled after T. J. Rogers' building. #8040 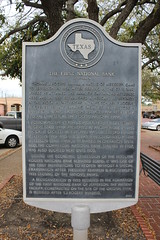