Jefferson. Home to the Caddo Indians for centuries, this area of Texas attracted Anglo-American colonists to settle here in the early 1800s. Founded in 1839, Jefferson developed along a double-grid pattern. Daniel Nelson Alley platted the townsite in a true north-south and east-west pattern, while Allen Urquhart drew a plan with streets leading diagonally to and from Big Cypress Bayou. Jefferson was a center of commerce and an important shipping point on the Red River system. Riverboats arrived at the wharves daily, making it a major inland port of entry for Texas pioneers. It was the seat of Cass County from 1846 to 1852, and was named seat of the new county of Marion in 1860. During the Civil War Jefferson served as a major supply center for the Confederacy. The late 1860s saw the imposition of martial law by Federal reconstruction troops, and a devastating fire in 1868 destroyed much of the central business district. Destruction of a massive logjam on the Red River in November 1873 diverted the river's flow and lowered the water in Big Cypress Bayou. The decline of Jefferson's economy due to the loss of its port continued until 20th-century tourism began to revive the town. (1990) #8053 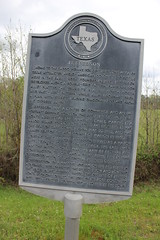