This travelogue includes a photograph of the Tilak plaque which is awkwardly positioned on the wall to the right of the entrance bay. It has been joined by another plaque commemorating Giovanni Antonio Canal placed on the front of the house; although it bears the name of the London County Council it was not authorised by them, and there is no connection between the artist and the building which post-dates Canaletto's life. During his time in London, there is no evidence that the Venetian painter lived anywhere but Beak Street. The origins of the plaque, which is indistinguishable from genuine LCC examples of the 1960-65 period, are a mystery. 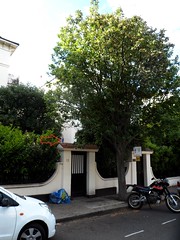 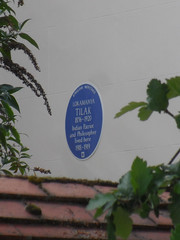 by English Heritage in 1988