Flamingo Park Historic District. There are 501 contributing structures within the Flamingo Park subdivision, which was officially platted on May 17, 1921, with more than 76 building permits issued in 1923. Built on the highest of all coastal ridges between downtown West Palm Beach and Miami, with an ocean view, Flamingo Park was home to many of the most prominent citizens of the time. The Florida Land Boom era is represented here in concentration of architecturally significant homes in Mission and Mediterranean Revival and Frame Vernacular styles, constructed between 1921 and the mid-1930s. Numerous Masonry Vernacular, Art Moderne, American Foursquare, Colonial Revival and Craftsmen/Bungalow residences are found here. The Alfred Comeau House at 701 Flamingo Drive was built in 1924. Comeau was a prominent businessman, who also built one of the first West Palm Beach skyscrapers in 1925. The Flamingo Park Historic District is listed on the National Register of Historic Places. 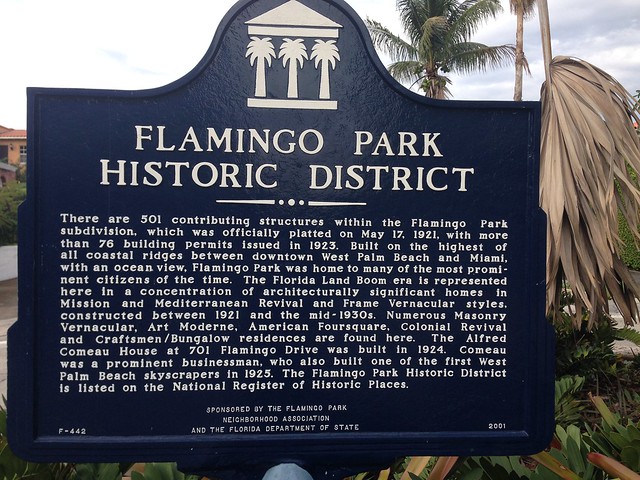