Near this site stood Millbank Prison, which was opened in 1816 and closed in 1880. This buttress stood at the head of the rivers steps from which, until 1857, prisoners sentenced to transportation embarked on their journey to Australia.

The plaque is placed on a large cylindrical granite block on the Thames Embankment side of Milbank, nearly opposite the entrance to Tate Britain. One of the last plaques to be commissioned by the London County Council, it was erected by the successor body, the enlarged Greater London Council, in May 1965, the LCC having been abolished on 1st April in that year. 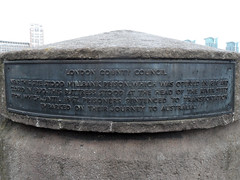 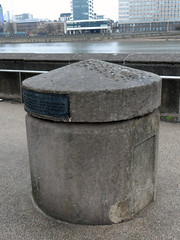