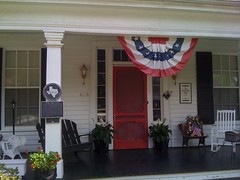 Oath of Office of President Johnson. Near this point on November 22, 1963, Vice-President Lyndon Baines Johnson took the oath of office as 36th President of the United States. He is the first Texan to hold the office of President. The ceremony was held in the central compartment of "Air Force One," the military aircraft assigned to the President. The plane was parked on the concrete ramp at Gate 28, east concourse of this terminal. United States District Judge Sarah T. Hughes, of Dallas, a friend of long standing, was summoned to administer the oath. (Judge Hughes thus became the first woman in history to give the oath of office to a president of the United States. The new Chief Executive, with Mrs. Johnson on his right and Mrs. John F. Kennedy on the left, was sworn into office at 2:38 p.m.In the stresses of the day President Johnson had executive duties thrust upon him immediately during the flight to the Capitol. For over 30 years he had been in public service. Like some of his ancestors (including a university president) he had taught school, as a young man. He had served with distinction in Congress, 1937 to 1949; and in the U.S. Senate, 1949 - 1960, with an unsurpassed record as Senate Majority Leader. #6805

?, Dallas, TX, United States where they was near

Alice Emmert Home. Built about 1868 in late Greek revival style by George B. Draper. Victorian elements were added by later owners before 1898, when the house was purchased by Alice Emmert (1866-1925). Miss Emmert, who was one of the first women elected to public office in Texas, served as county superintendent of education, 1908-20. Claudia Taylor (Mrs. Lyndon B. Johnson) lived here, 1924-26, while attending school. The structure is still owned by an Emmert heir. Recorded Texas Historic Landmark - 1974 #8030

Hometown of Mrs. Lyndon B. Johnson. (Wife of 36th President of the United States) On December 22, 1912, in the family home 2.7 miles south, was born Claudia Alta Taylor. She was third child (only daughter) of Thomas Jefferson and Minnie Pattillo Taylor. Her father had a general store in Karnack for many years. Young "Lady Bird" (a pet name originated by her nurse, Alice Tittle) attended public schools in Fern community, near here, and in Jefferson and Marshall, and earned Bachelor of Arts and Journalism degrees at the University of Texas. On November 17, 1934, she married Lyndon Baines Johnson, congressional staff member who became head of National Youth Administration in Texas in 1935. The Johnsons are parents of two daughters, Lynda Bird and Luci Baines. During her husband's rise to world leadership-- as United States Congressman, Senator, Senate Majority Leader, Vice President, and President-- Mrs. Johnson added to role of wife and mother that of hostess to many of the greatest statesmen of the world. As First Lady of the United States, she is true to her East Texas heritage of love for gardens, trees, unspoiled natural scenery, and historic sites. She sponsors vital national programs of conservation, beautification, and historical preservation. Outstanding Women of Texas Series, 1967. #10182