Charlotte of Mecklenburg-Strelitz (Sophia Charlotte; 19 May 1744 – 17 November 1818) was the wife of King George III. She was Queen of Great Britain and Ireland from her wedding in 1761 until the union of the two kingdoms in 1801, after which she was queen consort of the United Kingdom of Great Britain and Ireland until her death in 1818. She was also the Electress consort of Hanover in the Holy Roman Empire until the promotion of her husband to King of Hanover on 12 October 1814, after which she was also queen consort of Hanover. Charlotte was a patron of the arts and an amateur botanist who helped expand Kew Gardens. She was distressed by her husband's bouts of physical and mental illness, which became permanent in later life and resulted in their eldest son George's appointment as Prince Regent in 1811. George III and Charlotte had 15 children in total, 13 of whom survived to adulthood. They included two future British monarchs, George IV and William IV; Charlotte, Queen of Württemberg; Prince Edward, Duke of Kent and Strathearn, the father of Queen Victoria; and Ernest Augustus, King of Hanover. 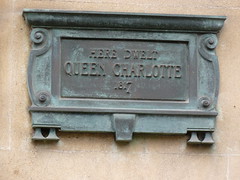