woman, scholar, distinguished servant of the state, historian, archaeologist, poet, gardener, explorer, traveller, administrator, peace maker, friend of the Arabs, and Commander of the Most Excellent Order of the British Empire

Gertrude Margaret Lowthian Bell, CBE (14 July 1868 – 12 July 1926) was an English writer, traveller, political officer, administrator, and archaeologist. She spent much of her life exploring and mapping the Middle East, and became highly influential to British imperial policy-making as an Arabist due to her knowledge and contacts built up through extensive travels. During her lifetime, she was highly esteemed and trusted by British officials such as High Commissioner for Mesopotamia Percy Cox, giving her great influence. She participated in both the 1919 Paris Peace Conference (briefly) and the 1921 Cairo Conference, which helped decide the territorial boundaries and governments of the post-War Middle East as part of the partition of the Ottoman Empire. Bell believed that the momentum of Arab nationalism was unstoppable, and that the British government should ally with nationalists rather than stand against them. Along with T. E. Lawrence, she advocated for independent Arab states in the Middle East following the collapse of the Ottoman Empire, and supported the installation of Hashemite monarchies in what is today Jordan and Iraq. Bell was raised in a privileged environment that allowed her to earn an education at Oxford University, travel the world, and make acquaintances of people who would become influential policy-makers later. In her travels, she became an excellent mountain climber and horseback rider. She expressed great affection for the Middle East, visiting Qajar Iran, Syria-Palestine, Mesopotamia, Asia Minor, and Arabia. She participated in archaeological digs during a time period of great ferment and new discoveries, and personally funded a dig at Binbirkilise in Asia Minor. She traveled through the Ha'il region in the northern part of the Arabian Peninsula during an extensive trip from 1913–1914, one of very few Westerners to have seen the area at the time. The outbreak of World War I in August 1914, and the Ottoman Empire's entry into the war a few months later on the side of Germany, upended the status quo in the Middle East. She briefly joined the Arab Bureau in Cairo, where she worked with T. E. Lawrence. At the request of family friend Lord Hardinge, Viceroy of India, she joined the British administration in Ottoman Mesopotamia in 1917, where she served as a political officer and as the Oriental Secretary to three High Commissioners: the only woman in such high-ranking civil roles in the British Empire. Bell also supported the cause of the largely urban Sunni population in their attempts to modernise Iraq. She spent much of the rest of her life in Baghdad and was a key player in the nation-building of what would eventually become the Kingdom of Iraq. She met and befriended an extensive number of Iraqis in both the cities and the countryside, and was a confidant and ally of Iraq's new King Faisal. Toward the end of her life, she was sidelined from Iraqi politics. Perhaps seeing she still needed something to occupy her, Faisal appointed her the Honorary Director of Antiquities of Iraq, where she returned to her original love of archaeology. In that role, she helped modernize procedures and catalogue findings, all of which helped prevent unauthorized looting of artifacts. She supported education for Iraqi women, served as president of the Baghdad library (the future Iraq National Library), and founded the Iraq Museum as a place to display the country's archaeological treasures. She died in 1926 of an overdose of sleeping pills in what was possibly a suicide, although she was in ill health regardless. Bell wrote extensively. She translated a book of Persian poetry; published multiple books describing her travels, adventures, and excavations; and sent a steady stream of letters back to England during World War I that influenced government thinking in an era when few English people were familiar with the contemporary Middle East. 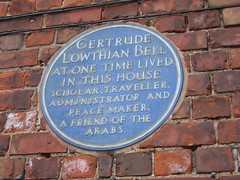 Gertrude Lowthian Bell at one time lived in this house. Scholar, traveller, administrator and peace maker. A friend of the Arabs.

Gertrude Bell. Born here on the 14th July 1868. She was a distinguished servant of the state, scholar, historian, archaeologist, explorer, poet and gardener. She died in Baghdad 12th July 1926.

Washington Hall, The Avenue, Washington, United Kingdom where they was born (1868)