woman, actor, and Dame Commander of the Most Excellent Order of the British Empire (from 1969)

Dame Florence Marjorie Wilcox, (née Robertson; 20 October 1904 – 3 June 1986), known professionally as Anna Neagle, was an English stage and film actress, singer and dancer. She was a successful box-office draw in the British cinema for 20 years and was voted the most popular star in Britain in 1949. She was known for providing glamour and sophistication to war-torn London audiences with her lightweight musicals, comedies and historical dramas. Almost all of her films were produced and directed by Herbert Wilcox, whom she married in 1943. In her historical dramas Anna Neagle was renowned for her portrayals of British historical figures, including Nell Gwynn (Nell Gwynn, 1934), Queen Victoria (Victoria the Great, 1937 and Sixty Glorious Years, 1938) and Edith Cavell (Nurse Edith Cavell, 1939). 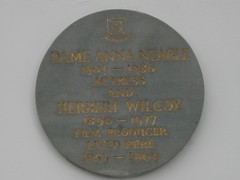