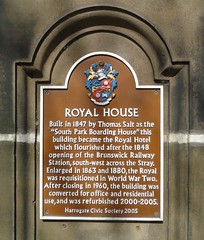 Royal House. Built in 1847 by Thomas Salt as the "South Park Boarding House" this building became the Royal Hotel which flourished after the 1848 opening of the Brunswick Railway Station, south-west across the Stray. Enlarged in 1863 and 1880, the Royal was requisitioned in World War Two. After closing in 1960, the building was converted for office and residential use, and was refurbished 2000-2005.