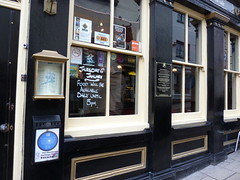 The Murderers pub, Timberhill, Norwich, United Kingdom where it sited