Sir George Skene of Fintray (1619–1708) was a Scottish merchant in the Baltic trade who served as Provost of the city of Aberdeen from 1676 to 1685. He was knighted in 1681. He was a burgh commissioner for Aberdeen in the Parliament of Scotland from 1681 to 1682 and 1685 to 1686. On his death in December 1708 he was buried in the family plot at the Kirk of St Nicholas. The flat stone lies close to the west boundary wall around midway on its length. Today he is most famous and widely known, not for his time as Provost, but for his house, which is a tourist attraction in Aberdeen. 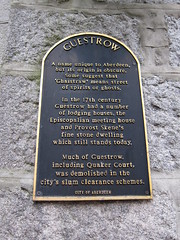 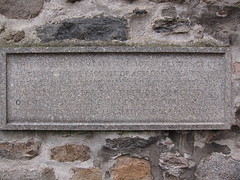 Guestrow. A name unique to Aberdeen, but its origin is obscure. Some suggest that 'Ghaistraw' means street of spirits or ghosts. In the 17th century Ghaistrow had a number of lodging houses, the Episcopalian meeting house and Provost Skene's fine stone dwelling which stands today. Much of Guestrow, including Quaker Court, was demolished in the city's slum clearance schemes.

off Broad Street, Aberdeen, United Kingdom where they lived near