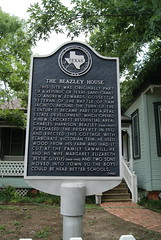 Beazley House. This site was originally part of a Republic of Texas land grant to Andrew Edwards Gossett, a veteran of the Battle of San Jacinto. Around the turn of the century it became part of a real estate development which opened a new Crockett residential area. Charles Harrison Beazley (1850-1929) purchased this property in 1912 and erected this cottage with elaborate victorian trim. He used wood from his farm and had it cut at the family sawmill. He and his wife Margaret Elizabeth "Bettie" (Lively) (1863-1960) and two sons moved into town so the boys could be near better schools.