woman, diarist, author, and patron of the arts

Hester Lynch Thrale Piozzi (née Salusbury; later Piozzi; 27 January 1741 or 16 January 1740 – 2 May 1821), a Welsh-born diarist, author and patron of the arts, is an important source on Samuel Johnson and 18th-century English life. She belonged to the prominent Salusbury family, Anglo-Welsh landowners, and married first a wealthy brewer, Henry Thrale, then a music teacher, Gabriel Mario Piozzi. Her Anecdotes of the Late Samuel Johnson (1786) and her diary Thraliana, published posthumously in 1942, are the main works for which she is remembered. She also wrote a popular history book and a dictionary. She has been seen as a protofeminist. 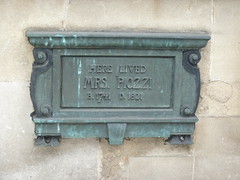 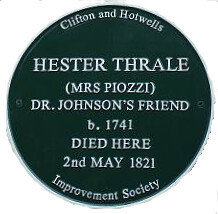