Frances Burney (13 June 1752 – 6 January 1840), also known as Fanny Burney and later Madame d'Arblay, was an English satirical novelist, diarist and playwright. In 1786–1790 she held the post as "Keeper of the Robes" to Charlotte of Mecklenburg-Strelitz, George III's queen. In 1793, aged 41, she married a French exile, General Alexandre d'Arblay. After a long writing career and wartime travels that stranded her in France for over a decade, she settled in Bath, England, where she died on 6 January 1840. The first of her four novels, Evelina (1778), was the most successful and remains her most highly regarded. Most of her plays were not performed in her lifetime. She wrote a memoir of her father (1832) and many letters and journals that have been gradually published since 1889.

Keeper of the Robes of Charlotte, Princess Royal 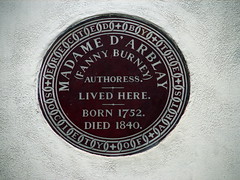 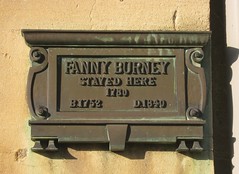 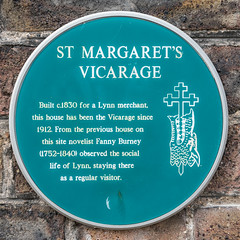 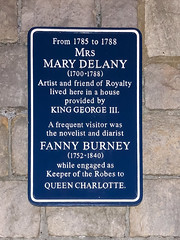 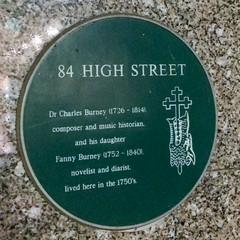 In this village Fanny Burney novelist and diarist and her husband Gen. D' Arblay built their cottage 'Camilla' they lived in Westhumble 1797-1801

St Margaret's Vicarage Built c.1830 for a Lynn merchant, this house has been the Vicarage since 1912. From the previous house on this site novelist Fanny Burney (1752-1840) observed the social life of Lynn, staying there as a regular visitor.

From 1785 to 1788 Mrs Mary Delany (1700-1788) artist and friend of Royalty lived here in a house provided by King George III. A frequent visitor was the novelist and diarist Fanny Burney (1752-1840) while engaged as Keeper of the Robes to Queen Charlotte.