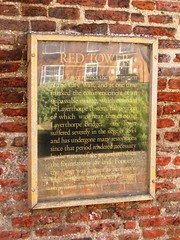 Red Tower. This Tower marks the termination of the City Walls, and at one time marked the commencement of an impassable swamp, which extended to Layerthorpe Postern, the position of which was near the existing Layerthorpe Bridge; the Tower suffered severely in the siege of 1644 and has undergone many restorations since that period rendered necessary by the nature of the ground on which the foundations are laid. Formerly the Tower was known as Brimstone House after a manufactory carried on within its walls.