place and range of houses 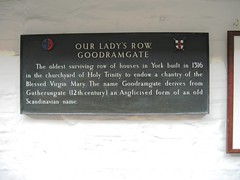 Our Lady's Row, Goodramgate. The oldest surviving row of houses in York built in 1316 in the churchyard of Holy Trinity to endow a chantry of the Bless Virgin Mary. The name Goodramgate derives from Gutherungate (13th. century) an Anglicised form of an old Scandinavian name.