Sir Joseph Terry JP (7 January 1828 – 12 January 1898) was a British confectioner, industrialist and Conservative politician who served as Lord Mayor of York on three occasions. He had previously served as a deputy mayor through his role as town sheriff in 1870, and served as Councillor for York's Monk Ward from 1860 until this appointment. He further acted as a Justice of the Peace for both the City of York and the North Riding of Yorkshire from 1887 until his death. He is widely seen as the driving force behind the success of the confectionery company Terry's, originally co-founded by his father, through the expansion of business operations through the use of the Humber Estuary to import essential commodities such as sugar and cocoa. Later in his career, he would oversee the company's transition and specialization into a chocolatiers. Terry had also registered the trademark 'Joseph Terry's and Sons' in 1876, which would later become incorporated under his chairmanship in 1895 as 'Joseph Terry & Sons Ltd.', three years before his death at the age of 70 in 1898, during an attempt to become Member of Parliament for the City of York constituency in a by-election. 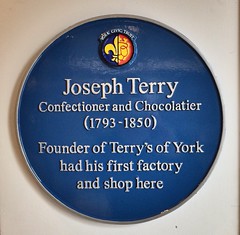