James Adam (21 July 1732 – 20 October 1794) was a Scottish architect and furniture designer, but was often overshadowed by his older brother and business partner, Robert Adam. They were sons of architect William Adam. In 1755 James worked on Gunsgreen House in the Berwickshire town of Eyemouth. In 1758, Robert, James, and their younger brother William Adam started their business in London (living in Lower Grosvenor Street), focusing on designing complete schemes for the decoration and furnishing of houses. Palladian design was popular, but Robert had evolved a new, more flexible style incorporating elements of classic Roman design alongside influences from Greek, Byzantine and Baroque styles. The Adam brothers’ success can also be attributed to a desire to design everything down to the smallest detail, ensuring a sense of unity in their designs. He then followed in Robert's footsteps by undertaking the Grand Tour, leaving in May 1760 to October 1763, when he arrive back in London. James succeeded Robert as Architect of the King’s Works in 1768 just before work on the brothers' Adelphi project (1768–1772) almost bankrupted the firm (the business employed other notable architects including Joseph Bonomi (1739–1808) who, from 1768, remained with the Adams until 1781). From 1771-5 he was engaged with his brother in the design and building of Wedderburn Castle near Duns, Berwickshire. James emerged from his brother's shadow after Robert's death in 1792, designing several notable buildings in Glasgow, including the old Infirmary (1792; demolished 1907), Assembly Rooms (1794; demolished in 1890) and the Tron Kirk (1794). He also designed Portland Place in central London. However, his glory was short-lived — he died at his home in London's Albermarle Street in October 1794. During their lifetime Robert and James Adam published two volumes of their designs, Works in Architecture of Robert and James Adam (in 1773–1778 and 1779; a third volume was published posthumously, in 1822). 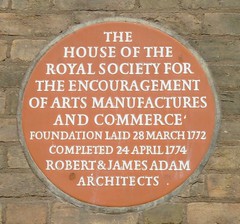 The House of the Royal Society for the Encouragement of Arts Manufactures and Commerce. Foundation Laid 28 March 1772 Complete 24 April 1774 Robert & James Adam Architects.