Lamberto Landi (Lucca, September 2, 1882 – Lucca, July 6, 1950) was an Italian composer and conductor. Born in Lucca, he first studied at that city's Istituto Musicale before traveling to Milan; there he studied with and at the Conservatory. His opera Il Pergolese, premiered in Milan in 1914, was published by Sonzogno in 1913; Ricordi published it in 1920. Other operas include: * Bianca (Lucca, 1910) * Nelly (completed 1916, premiered Lucca, 1947) – after The Old Curiosity Shop by Charles Dickens * Laurette (Pisa, 1927) * Gorgona (after the play by Sem Benelli) * Nausica The last two of these were never staged. Other compositions include orchestral works, chamber music, and sacred pieces. Landi taught at the Boccherini Institute in Lucca for some years. He died in Lucca. A Mass for mixed choir and orchestra has been recorded, along with an Andante for orchestra, and released on the Bongiovanni label. They are paired with a Mass and Andante religioso by Gaetano Luporini. 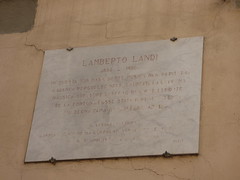 English translation: Lamberto Landi 1882 - 1950 In this house he said non-perishing music - to Bianca Pergolese in Laurette la Copgona Nausica-dream creatures of amcre of death If luck had been equal to the value - More fame fame Gluavrdbbe Apriso. The City of Lucca Auspice The Lucchese Academy of Sciences Letters Art In the 25th Anniversary of his death

Vineria della Pavona - 188 Via Fillungo, Lucca, Italy where they was