William Carey (17 August 1761 – 9 June 1834) was an English Christian missionary, Particular Baptist minister, translator, social reformer and cultural anthropologist who founded the Serampore College and the Serampore University, the first degree-awarding university in India. He went to Calcutta (Kolkata) in 1793, but was forced to leave the British Indian territory by non-Baptist Christian missionaries. He joined the Baptist missionaries in the Danish colony of Frederiksnagar in Serampore. One of his first contributions was to start schools for impoverished children where they were taught reading, writing, accounting and Christianity. He opened the first theological university in Serampore offering divinity degrees, and campaigned to end the practice of sati. Carey is known as the "father of modern missions." His essay, An Enquiry into the Obligations of Christians to Use Means for the Conversion of the Heathens, led to the founding of the Baptist Missionary Society. The Asiatic Society commended Carey for “his eminent services in opening the stores of Indian literature to the knowledge of Europe and for his extensive acquaintance with the science, the natural history and botany of this country and his useful contributions, in every branch.” He translated the Hindu classic, the Ramayana, into English, and the Bible into Bengali, Oriya, Assamese, Marathi, Hindi and Sanskrit. William Carey has been called a reformer and illustrious Christian missionary. 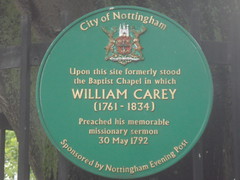 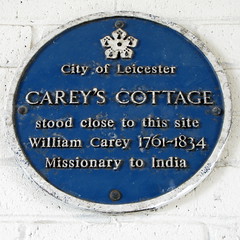 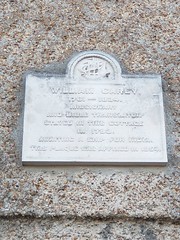 opposite the main entrance to Holiday Inn, St. Nicholas Circle, Leicester, United Kingdom where they was

railings, Maid Marion Way, Nottingham, United Kingdom where they was

In this house on Octr. 2nd 1792, a meeting was held to form a society for propagating the Gospel among the heathen and £13.2s.6d was contributed for that purpose. Andrew Fuller was elected Secretary and Reynold Hogg Treasurer. William Carey to whose sermon at Nottingham in May of the same year, the movement was due, embarked for India on June 13th 1793. This meeting marks the founding of the Baptist Missionary Society and the inauguration of modern foreign missions. "Expect great things from God, attempt great things for God"

Carey Mission House, Kettering, United Kingdom where they was (1792)

William Carey DD preached his great missionary sermon in this building - then Baptist chapel - on May 30th 1792.