("Thomas of Lancaster" redirects here. For a brother of Henry V of England, see Thomas of Lancaster, 1st Duke of Clarence.) Thomas, Earl of Leicester and Lancaster (c. 1278 – 22 March 1322) was an English nobleman. A junior member of the House of Plantagenet, he was one of the leaders of the baronial opposition to his first cousin, Edward II of England. 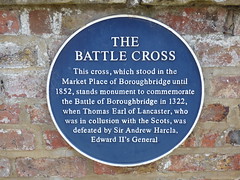 The Battle Cross. This cross, which stood in the Market Place of Boroughbridge until 1852, stands monument to commemorate the Battle of Boroughbridge in 1322, when Thomas Earl of Lancaster, who was in collusion with the Scots, was defeated by Sir Andrew Harcla, Edward II's General.

Junction of Low Road and Front Street, Aldborough, United Kingdom where they was defeated (1322)