The East Coast Main Line (ECML) is a 393-mile long (632 km) electrified railway between London and Edinburgh via Peterborough, Doncaster, York, Darlington, Durham and Newcastle. The line is a key transport artery on the eastern side of Great Britain running broadly parallel to the A1 road. The line was built during the 1840s by three railway companies, the North British Railway, the North Eastern Railway, and the Great Northern Railway. In 1923, the Railway Act of 1921 led to their amalgamation to form the London and North Eastern Railway (LNER) and the line became its primary route. The LNER competed with the London, Midland and Scottish Railway (LMS) for long-distance passenger traffic between London and Scotland. The LNER's chief engineer Sir Nigel Gresley designed iconic Pacific steam locomotives, including the "Flying Scotsman" and "Mallard" which achieved a world record speed for a steam locomotive, 126 miles per hour (203 km/h) on the Grantham-to-Peterborough section. On 1 January 1948, the railways were nationalised and operated by British Railways. In the early 1960s, steam was replaced by Diesel-electric traction, including the Deltics and sections of the line were upgraded so that trains could run at speeds of up to 100 miles per hour (160 km/h). With the demand for higher speed, British Rail introduced InterCity 125 high-speed trains between 1976 and 1981. In 1973, the prototype of the HST, the Class 41, achieved a top speed of 143 mph (230 km/h) in a test run. In the 1980s, the line was electrified and InterCity 225 trains were introduced. The line links London, South East England and East Anglia, with Yorkshire, the North East and Scotland and is important to their local economies. It carries key commuter traffic in north London and cross-country, commuter, local passenger services, and freight. Services north of Edinburgh to Aberdeen and Inverness use diesel trains. In 1997, operations were privatised. It is operated by London North Eastern Railway which took over from Virgin Trains East Coast in June 2018. 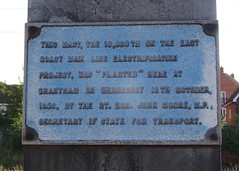 This mast, the 10,000th on the East Coast Main Line electrification project was "planted" here at Grantham on Wednesday 15th October, 1986, by the Rt. Hon. John Moore, M.P., Secretary of State for Transport.