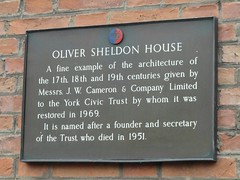 Oliver Sheldon House. A fine example of the architecture of the 17th, 18th and 19th centuries given by Messrs. J. W. Cameron & Company Limited to the York Civic Trust by whom it was restored in 1969. It is named after a founder and secretary of the Trust who died in 1951.