George Villiers, 1st Duke of Buckingham, KG (/ˈvɪlərz/; 28 August 1592 – 23 August 1628), was an English courtier, statesman, and patron of the arts. He was a favourite and possibly also a lover of King James I of England. Buckingham remained at the height of royal favour for the first three years of the reign of James's son, King Charles I, until a disgruntled army officer assassinated him. 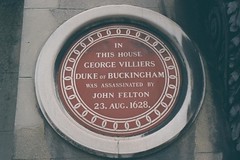 In this house George Villiers Duke of Buckingham was assassinated by John Felton 23. Aug. 1628.