scientist, discoverer of vaccination, Fellow of the Royal Society, and Doctor - Bachelor of Medicine MBBS

Edward Jenner, FRS FRCPE (17 May 1749 – 26 January 1823) was an English physician and scientist who pioneered the concept of vaccines including creating the smallpox vaccine, the world's first vaccine. The terms vaccine and vaccination are derived from Variolae vaccinae (smallpox of the cow), the term devised by Jenner to denote cowpox. He used it in 1798 in the long title of his Inquiry into the Variolae vaccinae known as the Cow Pox, in which he described the protective effect of cowpox against smallpox. In the West, Jenner is often called "the father of immunology", and his work is said to have "saved more lives than the work of any other human". In Jenner's time, smallpox killed around 10% of the population, with the number as high as 20% in towns and cities where infection spread more easily. In 1821, he was appointed physician extraordinary to King George IV, and was also made mayor of Berkeley and justice of the peace. A member of the Royal Society, in the field of zoology he was the first person to describe the brood parasitism of the cuckoo. In 2002, Jenner was named in the BBC's list of the 100 Greatest Britons. 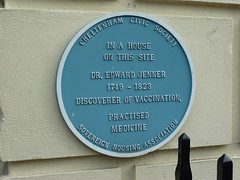 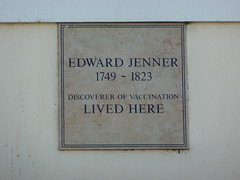 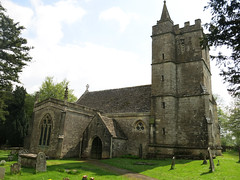 Marybrook Street, Berkeley, United Kingdom where they was born (1749)

In a house on this site Dr. Edward Jenner 1749-1823 discoverer of vaccination, practised medicine

Edward Jenner 1749-1823 was married in this church to Catherine Kingscote 6th March 1788. His work in connection with the introduction of vaccination has made him ever dear to the human race. His marriage brought him much happiness

parish church at Kinsgscote, Cheltenham, United Kingdom where they married (1788)