Haakon VII (Norwegian pronunciation: [ˈhòːkɔn]; born Prince Carl of Denmark; 3 August 1872 – 21 September 1957) was the King of Norway from November 1905 until his death in September 1957. Originally a Danish prince, he was born in Copenhagen as the son of the future Frederick VIII of Denmark and Louise of Sweden. Prince Carl was educated at the Royal Danish Naval Academy and served in the Royal Danish Navy. After the 1905 dissolution of the union between Sweden and Norway, Prince Carl was offered the Norwegian crown. Following a November plebiscite, he accepted the offer and was formally elected King of Norway by the Storting. He took the Old Norse name Haakon and ascended to the throne as Haakon VII, becoming the first independent Norwegian monarch since 1387. Norway was invaded by Nazi Germany in April 1940. Haakon rejected German demands to legitimise the Quisling regime's puppet government, and refused to abdicate after going into exile in Great Britain. As such, he played a pivotal role in uniting the Norwegian nation in its resistance to the invasion and the subsequent five-year-long occupation during the Second World War. He returned to Norway in June 1945 after the defeat of Germany. He became King of Norway when his grandfather Christian IX was still reigning in Denmark, and before his father and elder brother became kings of Denmark. During his reign he saw his father Frederick VIII, his elder brother Christian X, and his nephew Frederick IX ascend the throne of Denmark, in 1906, 1912 (also of Iceland from 1918 to 1944), and 1947 respectively. Haakon died at the age of 85 in September 1957, after having reigned for nearly 52 years. He was succeeded by his only son, who ascended to the throne as Olav V. 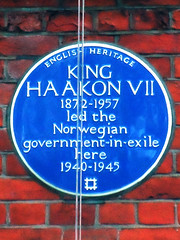