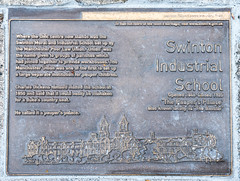 Where the civic centre now stands was the Swinton Moral and Industrial School set up by the Manchester Poor Law Union. 'Union' was the name given to groups of parishes which had joined together to provide workhouses. The Manchester Union was one of the first to set up a large separate institution for pauper children. Charles Dickens himself visited the school in 1850 and said that it could easily be mistaken for a duke's country seat. He called it a pauper's palace. Swinton Industrial School Opened in 1846 - Closed 1925 'The Pauper's Palace' also locally known as "The Bastille"