Catherine of Braganza (Portuguese: Catarina de Bragança; 25 November 1638 – 31 December 1705) was Queen of England, Scotland and Ireland from 1662 to 1685, as the wife of King Charles II. Catherine was born into the House of Braganza, the most senior noble house of Portugal, which became Portugal's royal house after Catherine's father, John, 8th Duke of Braganza, was proclaimed King John IV after deposing the House of Habsburg in 1640. Owing to her devotion to the Roman Catholic beliefs in which she had been raised, Catherine was an unpopular consort for Charles II. She was a special object of attack by the inventors of the Popish Plot. In 1678 the murder of Sir Edmund Berry Godfrey was ascribed to her servants, and Titus Oates accused her of an intention to poison the king. These charges, the absurdity of which were soon shown by cross-examination, nevertheless placed the queen for some time in great danger. On 28 November Oates accused her of high treason, and the Commons passed an order for her removal and that of all Roman Catholics from Whitehall. A series of fresh depositions were made against her, and in June 1679 it was decided that she must stand trial; but she was protected by the king, which earned her gratitude. Catherine had three miscarriages and produced no heirs. Her husband kept many mistresses, most notably Barbara Palmer, whom Catherine was forced to accept as one of her Ladies of the Bedchamber.Charles fathered numerous illegitimate offspring by his mistresses whom he acknowledged. She and Charles are credited with introducing the custom of drinking tea to the British court, which was common among the Portuguese nobility. 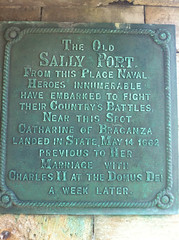 The Old Sally Port. From this place naval heroes innumerable have embarked to fight their countrys battles. Near this spot Catherine of Braganza landed in state, May 14 1662 previous to her marriage with Charles II at the Domus Dei a week later.

Waterfront, Portsmouth, United Kingdom where they landed in state