novelist, Fellow of the Royal Society of Edinburgh, and 1st Baronet Scott of Abbotsford (from 1820)

Sir Walter Scott, 1st Baronet FRSE FSAScot (15 August 1771 – 21 September 1832), was a Scottish historical novelist, poet, playwright and historian. Many of his works remain classics of European and Scottish literature, notably the novels Ivanhoe, Rob Roy, Waverley, Old Mortality, The Heart of Mid-Lothian and The Bride of Lammermoor, and the narrative poems The Lady of the Lake and Marmion. He had a major impact on European and American literature. As an advocate, judge and legal administrator by profession, he combined writing and editing with daily work as Clerk of Session and Sheriff-Depute of Selkirkshire. He was prominent in Edinburgh's Tory establishment, active in the Highland Society, long a president of the Royal Society of Edinburgh (1820–1832), and a vice president of the Society of Antiquaries of Scotland (1827–1829). His knowledge of history and literary facility equipped him to establish the historical novel genre and as an exemplar of European Romanticism. He became a baronet "of Abbotsford in the County of Roxburgh", Scotland, on 22 April 1820; the title became extinct on his son's death in 1847. 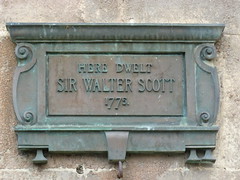 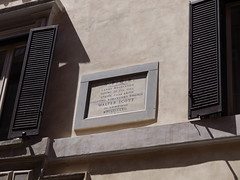 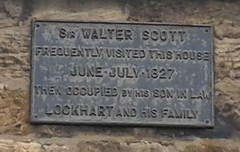 In this building from 1803 to 1832 Sir Walter Scott as Sheriff of Selkirkshire administ...
Selkirk, United Kingdom 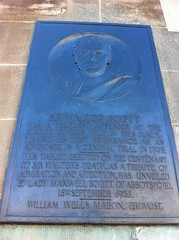 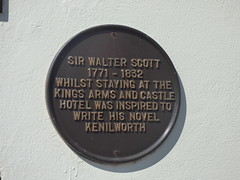 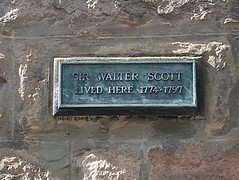 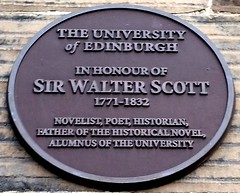 Via della Mercede 11, Rome, Italy where they lived

In a building on this site Sir Walter Scott Bt. was entertained by the Galashiels Manufacturers Corporation after receiveing his Baronetcy at the hands of his sovereign George IV

Bank Close, Galashiels, United Kingdom where they was entertained

Sir Walter Scott frequently visited this house June-July 1827 then occupied by his son in law Lockhart and his family.

Sir Walter Scott was a frequent attender at the Circuit Courts held in this place. Making his first appearance as an advocate in a criminal trial in 1793. This tablet erected on the centenary of Sir Walter's death, as a tribute of admiration and affection, was unveiled by Lady Maxwell Scott of Abbotsford, 15th September 1932. William Wells Mabon, Provost.

, Jedburgh, United Kingdom where they was a constant visitor

Sir Walter Scott granted freedom of the burgh in 1799. Between 1797 and 1808, Scott was a regular visitor to the town while serving as Quartermaster for a volunteer regiment [full inscription unknown]

THE SCOTT MONUMENT Erected 1840-44 to the Memory of SIR WALTER SCOTT Bart. 1771-1832 Born in Edinburgh. Lawyer and ardent Patriot, he won enduring fame as a romantic poet and the author of the Waverley novels. The monument was designed by George Meikle Kemp and the statue of Scott is by Sir John Steell.

Princes Street, Edinburgh, United Kingdom where they was near

Guthrie Street, Edinburgh, United Kingdom where they was born (1771)

In honour of Sir Walter Scott 1771 - 1832. Novelist, poet, historian, father of the historical novel, alumnus of the University.

William Schollay's Ship Inn. Sir Walter Scott dined here on 12 August 1814, during a visit to Orkney and Shetland with the Commissioners of the Northern Lighthouses

The Knowes, Kelso, United Kingdom where they stayed