Edward Knoblock (born Edward Gustavus Knoblauch; 7 April 1874 – 19 July 1945) was a playwright and novelist, originally American and later a naturalised British citizen. He wrote numerous plays, often at the rate of two or three a year, of which the most successful were Kismet (1911) and Milestones (1912, co-written with Arnold Bennett). Many of his plays were collaborations, with, among others, Vicki Baum, Beverley Nichols, J. B. Priestley and Vita Sackville-West. After serving in the British armed forces during the First World War, he combined his theatrical career with work on films, both in Hollywood and the UK. He lived most of his adult life in London, where he died in 1945 at the age of 71. 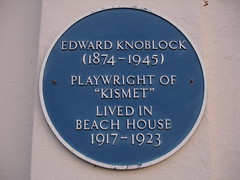