woman, Commander of the Most Excellent Order of the British Empire, and Doctor of Medicine

Louisa Garrett Anderson, CBE (28 July 1873 – 15 November 1943) was a medical pioneer, a member of the Women's Social and Political Union, a suffragette, and social reformer. She was the daughter of the founding medical pioneer Elizabeth Garrett Anderson, whose biography she wrote in 1939. Anderson was the Chief Surgeon of the Women's Hospital Corps (WHC) and a Fellow of the Royal Society of Medicine. Her aunt, Dame Millicent Fawcett, was a British suffragist. Her partner was fellow doctor and suffragette Flora Murray. Her cousin was Dr Mona Chalmers Watson who also supported suffragettes and founded the Women's Army Auxiliary Corps. 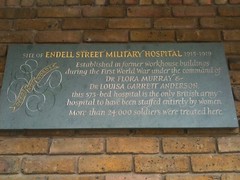