Eleanor Gwyn (2 February 1650 – 14 November 1687; also spelled Gwynn, Gwynne) was a prolific celebrity figure of the Restoration period. Praised by Samuel Pepys for her comic performances as one of the first actresses on the English stage, she became best known for being a long-time mistress of King Charles II of England and Scotland. Called "pretty, witty Nell" by Pepys, she has been regarded as a living embodiment of the spirit of Restoration England and has come to be considered a folk heroine, with a story echoing the rags-to-royalty tale of Cinderella. Gwyn had two sons by King Charles: Charles Beauclerk (1670–1726) and James Beauclerk (1671–1680) (the surname is pronounced boh-clair). Charles was created Earl of Burford and later Duke of St. Albans. 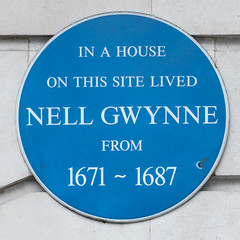 Site of the birthplace of Nell Gwynne. Founder of Chelsea Hospital and mother of the first Duke of St Albans. Born 1650. Died 1687. The house was demolished in 1858.

Gwynne Street, Hereford, United Kingdom where they was born (1650)