Fellow of the Royal Society, founder of science-based industry, discoverer of the first aniline dyestuff (from 1856), and Knight Bachelor (from 1906)

Sir William Henry Perkin FRS (12 March 1838 – 14 July 1907) was a British chemist and entrepreneur best known for his serendipitous discovery of the first commercial synthetic organic dye, mauveine, made from aniline. Though he failed in trying to synthesise quinine for the treatment of malaria, he became successful in the field of dyes after his first discovery at the age of 18. Perkin set up a factory to produce the dye industrially. Lee Blaszczyk, professor of business history at the University of Leeds, states, "By laying the foundation for the synthetic organic chemicals industry, Perkin helped to revolutionize the world of fashion." 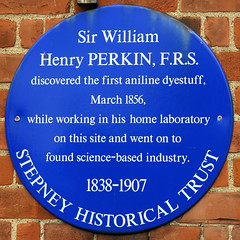 Sir William Henry Perkin FRS discovered the first aniline dyestuff, March 1856, while working in his home laboratory on this site and went on to found science-based industry. 1838-1907

Cable Street, London, United Kingdom where they lived and worked

Sir William H. Perkin (1838-1907) discovered mauveine, the world’s first synthetic dyestuff, in 1856. He and his brother Thomas produced mauveine from a factory on this site in 1857, and later alizarin, thus laying the foundations of the organic chemicals industry. This replaces a centenary plaque unveiled by Sir R Robinson in 1957.

Sir William Henry Perkin established on this site in 1857 the first synthetic dye factory in the world. Respice prospice. 1838-1907.