John Fitzgerald Kennedy (May 29, 1917 – November 22, 1963), often referred to by his initials JFK, was an American politician who served as the 35th president of the United States from 1961 until his assassination near the end of his third year in office. Kennedy served at the height of the Cold War, and the majority of his work as president concerned relations with the Soviet Union and Cuba. A Democrat, Kennedy represented Massachusetts in both houses of the U.S. Congress prior to his presidency. Born into the prominent Kennedy family in Brookline, Massachusetts, Kennedy graduated from Harvard University in 1940 before joining the U.S. Naval Reserve the following year. During World War II, he commanded a series of PT boats in the Pacific theater. Kennedy's survival of the sinking of PT-109 and rescue of his fellow sailors made him a war hero for which he earned the Navy and Marine Corps Medal, but left him with serious injuries. After a brief stint in journalism, Kennedy represented a working-class Boston district in the U.S. House of Representatives from 1947 to 1953. He was subsequently elected to the U.S. Senate and served as the junior senator for Massachusetts from 1953 to 1960. While in the Senate, Kennedy published his book, Profiles in Courage, which won a Pulitzer Prize. In the 1960 presidential election, he narrowly defeated Republican opponent Richard Nixon, who was the incumbent vice president. Kennedy's humor, charm, and youth in addition to his father's money and contacts were great assets in the campaign. Kennedy's campaign gained momentum after the first televised presidential debates in American history. Kennedy was the first Catholic elected president. Kennedy's administration included high tensions with communist states in the Cold War. As a result, he increased the number of American military advisers in South Vietnam. The Strategic Hamlet Program began in Vietnam during his presidency. In April 1961, he authorized an attempt to overthrow the Cuban government of Fidel Castro in the failed Bay of Pigs Invasion. Kennedy authorized the Cuban Project in November 1961. He rejected Operation Northwoods (plans for false flag attacks to gain approval for a war against Cuba) in March 1962. However, his administration continued to plan for an invasion of Cuba in the summer of 1962. The following October, U.S. spy planes discovered Soviet missile bases had been deployed in Cuba; the resulting period of tensions, termed the Cuban Missile Crisis, nearly resulted in the breakout of a global thermonuclear conflict. He also signed the first nuclear weapons treaty in October 1963. Kennedy presided over the establishment of the Peace Corps, Alliance for Progress with Latin America, and the continuation of the Apollo program with the goal of landing a man on the Moon before 1970. He also supported the civil rights movement, but was only somewhat successful in passing his New Frontier domestic policies. On November 22, 1963, he was assassinated in Dallas. Vice President Lyndon B. Johnson assumed the presidency upon Kennedy's death. Marxist and former U.S. Marine Lee Harvey Oswald was arrested for the assassination, but he was shot and killed by Jack Ruby two days later. The FBI and the Warren Commission both concluded Oswald had acted alone in the assassination, but various groups contested the Warren Report and believed that Kennedy was the victim of a conspiracy. After Kennedy's death, Congress enacted many of his proposals, including the Civil Rights Act and the Revenue Act of 1964. Despite his truncated presidency, Kennedy ranks highly in polls of U.S. presidents with historians and the general public. His personal life has also been the focus of considerable sustained interest following public revelations in the 1970s of his chronic health ailments and extramarital affairs. Kennedy was the most recent U.S. president to have been assassinated as well as the most recent U.S. president to die in office. 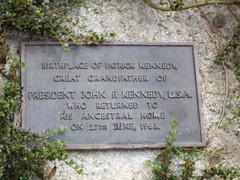 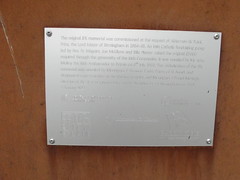 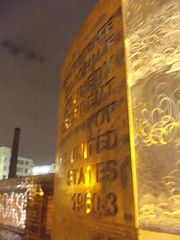 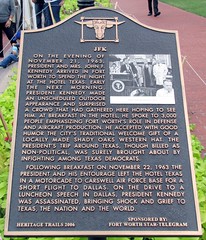 Dunganstown (right off the R733 travelling south from New Ross), New Ross, Ireland where they visited (1963)

John F. Kennedy President of the United States stood here when he delivered his address on the interdependence of nations July 4th 1962

111 Front St, Key West, FL, United States where they was

The original JFK memorial was commissioned at the request of Alderman Sir Frank Price, the Lord Mayor of Birmingham in 1964-65. An Irish Catholic fundraising group led by Rev. Fr. Maguire, Joe McGlynn and Billy Hestor raised the original £5000 required through the generosity of the Irish Community. It was unveiled by Mr John Mclloy the Irish Ambassador to Britain on 8th July 1968. The rededication of the JFK memorial was unveiled by Monsignor P. Browne Parish Priest of St. Anne's and designated representative of Archbishop Longley and Monsignor J. Daniel McHugh Director of the Regeneration of the Archdiocese of Birmingham 23rd February 2013.

Rice University. William Marsh Rice (1816-1900) came to Texas in 1838 and through extensive entrepreneurship became one of the state's wealthiest men. Rice envisioned a polytechnic school as his philanthropic legacy. The State of Texas chartered the William M. Rice Institute for the Advancement of Literature, Science and Art on May 19, 1891. Rice delayed the project by stipulating that it open after his death. When he died under suspicious circumstances, investigations and legal struggles jeopardized the school's future. After his estate was settled, development began for the first university in Houston. Trustees had a multi-million dollar endowment but little experience in education. The first president, Dr. Edgar Odell Lovett of Princeton University, spent months visiting experts around the world. His experiences helped him broaden Rice's vision to a university uniting teaching and research. In 1909, the Boston firm of Cram, Goodhue and Ferguson developed the campus plan, combining classically-inspired architecture with Mediterranean influences. On Sep. 23, 1912, classes opened with 59 young men and women and four buildings. Rice was a charter athletic member of the Southwest Conference (1914) and quickly achieved academic accreditation, with the first class graduating in 1916. Two world wars and the Great Depression slowed growth. In 1945, trustees broadened the curriculum and initiated a substantial building program. Renamed Rice University in 1960, the school has hosted presidential visits, including John F. Kennedy's in 1962 when he urged the nation's space program to explore the moon by the end of the decade. Rice boasts many distinguished alumni and faculty, including Nobel and Pulitzer Prize recipients. In 2012 Rice University embarked on its second century of producing "leaders across the spectrum of human endeavor." 175 Years of Texas Independence * 1836-2011 #17005

JFK On the evening of November 21, 1963, President and Mrs. John F. Kennedy arrived in Fort Worth to spend the night at the Hotel Texas. Early the next morning, President Kennedy made an unscheduled outdoor appearance and surprised a crowd that had gathered here hoping to see him. At breakfast in the hotel, he spoke to 3,000 people emphasizing Fort Worth’s role in defense and aircraft production. He accepted with good humor the city’s traditional welcome gift of a locally made Shady Oaks Western Hat. The president’s trip around Texas, though billed as non-political, was surely brought about by infighting among Texas democrats. Following breakfast on November 22, 1963 the president and his entourage left the Hotel Texas in a motorcade to Carswell Air Force Base for a short flight to Dallas. On the drive to a luncheon speech in Dallas, President Kennedy was assassinated, bringing shock and grief to Texas, the nation and the world.

999 Main St, Fort Worth, TX, United States where they was