David Lloyd George, 1st Earl Lloyd-George of Dwyfor, OM PC (17 January 1863 – 26 March 1945) was Prime Minister of the United Kingdom from 1916 to 1922. He was a Liberal politician known for advocating Welsh devolution, social reform policies, wartime governance, his role in the Paris Peace Conference and negotiating the establishment of the Irish Free State. Lloyd George was born on 17 January 1863 in Chorlton-on-Medlock, Manchester, to Welsh parents; he spoke Welsh as his first language. From the age of around three months he was raised in Wales, first briefly in Pembrokeshire and then in Llanystumdwy, Gwynedd. He is the only Welshman and also Welsh speaker, to have been prime minister of the UK. His father, a schoolmaster, died in 1864, and David was raised in Wales by his mother and her shoemaker brother, whose Liberal politics and Baptist faith strongly influenced Lloyd George; the same uncle helped the boy embark on a career as a solicitor after leaving school. Lloyd George became active in local politics, gaining a reputation as an orator and a proponent of a Welsh blend of radical Liberalism which championed Welsh devolution, the disestablishment of the Anglican church in Wales, equality for labourers and tenant farmers, and reform of land ownership. In 1890, he narrowly won a by-election to become the Member of Parliament for Caernarvon Boroughs, in which seat he remained for 55 years. He served in Henry Campbell-Bannerman's cabinet from 1905. After H. H. Asquith succeeded to the premiership in 1908, Lloyd George replaced him as Chancellor of the Exchequer. To fund extensive welfare reforms he proposed taxes on land ownership and high incomes in the "People's Budget" (1909), which the Conservative-dominated House of Lords rejected. The resulting constitutional crisis was only resolved after two elections in 1910 and the passage of the Parliament Act 1911. His budget was enacted in 1910, and with the National Insurance Act 1911 and other measures helped to establish the modern welfare state. In 1913, he was embroiled in the Marconi scandal, but he remained in office and promoted the disestablishment of the Church in Wales, until the outbreak of the First World War in 1914 suspended its implementation. As wartime Chancellor, Lloyd George strengthened the country's finances and forged agreements with trade unions to maintain production. In 1915, Asquith formed a Liberal-led wartime coalition with the Conservatives and Labour. Lloyd George became Minister of Munitions and rapidly expanded production. Amongst other measures, he set up four large munitions factories as a counter measure to the shell crisis of the previous year. The so-called 'National Filling Factory' in Renfrewshire was named 'Georgetown' in Lloyd George's honour. In 1916, he was appointed Secretary of State for War but was frustrated by his limited power and clashes with the military establishment over strategy. Amid stalemate on the Western Front, confidence in Asquith's leadership waned. He was forced to resign in December 1916; Lloyd George succeeded him as prime minister, supported by the Conservatives and some Liberals. He centralised authority through a smaller war cabinet, a new Cabinet Office and his "Garden Suburb" of advisers. To combat food shortages he implemented the convoy system, established rationing, and stimulated farming. After supporting the disastrous French Nivelle Offensive in 1917, he had to reluctantly approve Field Marshal Haig's plans for the Battle of Passchendaele which resulted in huge casualties with little strategic benefit. Against the views of his commanders, he was finally able to see the Allies brought under one command in March 1918. The war effort turned to their favour that August and was won in November. In the aftermath he and the Conservatives maintained their coalition with popular support following the December 1918 "Coupon" election. His government had extended the franchise to all men and some women earlier in the year. Lloyd George was a major player in the Paris Peace Conference of 1919 but the situation in Ireland worsened that year, erupting into the Irish War of Independence, which lasted until Lloyd George negotiated independence for the Irish Free State in 1921. At home he initiated reforms to education and housing but trade union militancy entered record levels, the economy became depressed in 1920 and unemployment rose; spending cuts followed (1921–22) and he was embroiled in a scandal over the sale of honours and the Chanak Crisis in 1922. Bonar Law won backbench support for the Conservatives to contend the next election alone. Lloyd George resigned as prime minister and never held office again, but continued as leader of a Liberal faction. After an awkward reunion with Asquith's faction in 1923, Lloyd George led the Liberals from 1926 to 1931. He put forward innovative proposals for public works and other reforms in a series of coloured books, but made only modest gains in the 1929 election. After 1931, he was a mistrusted figure heading a small rump of breakaway Liberals opposed to the National Government. He refused to serve in Winston Churchill's War Cabinet in 1940. He was raised to the peerage in 1945, shortly before his death. 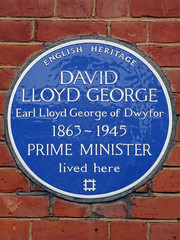 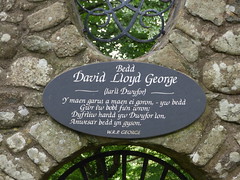 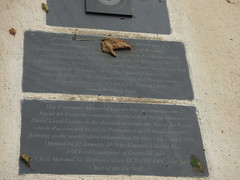 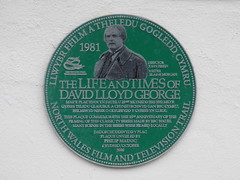 English translation: Bedd David Lloyd George ~ (Earl of Dwyfor) ~ The grave is the rough mound and its crown She was a womb; Dwyfor lon is a beautiful watercolor, Angry the grave constantly. W.R.P. George

Grave of David Lloyd George near the Afon Dwyfor, Llanystumdwy, United Kingdom where they was buried (1945)

This Centenary Memorial Garden was presented by the Royal Air Force to commemorate the role of Prime Minister David Lloyd George in the decision to create the Royal Air Force, which was enacted by Act of Parliament on 29 November 1917, forming as the world's first independent Air Force on 1 April 1918. Opened on 12 January 2018 by Edmund S Bailey Esq. HM Lord-Lieutenant of Gwynedd and Chief Marshal Sir Stephen Hillier KCB CBE DFC ADC MA Chief of the Air Staff. [full inscription unknown]

Between the Lloyd George Museum and Highgate (childhood home of David Lloyd George), Llanystumdwy, United Kingdom where they was

English translation: 1981 Director John Hefin Writer Elaine Morgan The Life and Times of David Lloyd George This plaque commemorates the 25th Anniversary of the filming of this classic TV series made by BBC Wales, many scenes in the series were filmed locally Plaque unveiled by Philip Madoc 6 October 2006