Admiral of the Fleet Louis Francis Albert Victor Nicholas Mountbatten, 1st Earl Mountbatten of Burma (born Prince Louis of Battenberg; 25 June 1900 – 27 August 1979), was a member of British royal family, Royal Navy officer and statesman, a maternal uncle of Prince Philip, Duke of Edinburgh, and second cousin once removed of Queen Elizabeth II. During the Second World War, he was Supreme Allied Commander, South East Asia Command. He was the last Viceroy of India of British India, and the first governor-general of the Dominion of India. Born in Windsor to the prominent Battenberg family, Mountbatten attended the Royal Naval College, Osborne, before entering the Royal Navy in 1916. He saw action during the closing phase of the First World War, and after the war briefly attended Christ's College, Cambridge. During the interwar period, Mountbatten continued to pursue his naval career, specialising in naval communications. Following the outbreak of the Second World War, Mountbatten commanded the destroyer HMS Kelly and the 5th Destroyer Flotilla and saw considerable action in Norway, the English Channel and the Mediterranean. In August 1941, he received command of the aircraft carrier HMS Illustrious. He was appointed chief of Combined Operations and a member of the Chiefs of Staff Committee in early 1942, and organised the raids on St Nazaire and Dieppe. In August 1943, Mountbatten became Supreme Allied Commander South East Asia Command and oversaw the recapture of Burma and Singapore from the Japanese by the end of 1945. For his service during the war, Mountbatten was created viscount in 1946 and earl the following year. In March 1947, Mountbatten was appointed Viceroy of India and oversaw the Partition of British India into India and Pakistan. He then served as the first Governor-General of India until June 1948. In 1952, Mountbatten was appointed commander-in-chief of the British Mediterranean Fleet and NATO Commander Allied Forces Mediterranean. From 1955 to 1959, he was First Sea Lord, a position that had been held by his father, Prince Louis of Battenberg, some forty years earlier. Thereafter he served as chief of the Defence Staff until 1965, making him the longest-serving professional head of the British Armed Forces to date. During this period Mountbatten also served as chairman of the NATO Military Committee for a year. In August 1979, Mountbatten was assassinated by a bomb planted aboard his fishing boat in Mullaghmore, County Sligo, Ireland, by members of the Provisional Irish Republican Army. He received a ceremonial funeral at Westminster Abbey and was buried in Romsey Abbey in Hampshire. 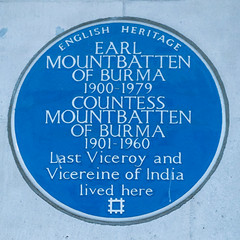