Caroline of Brunswick (Caroline Amelia Elizabeth; 17 May 1768 – 7 August 1821) was Queen of the United Kingdom and Hanover as the wife of King George IV from 29 January 1820 until her death in 1821. She was Princess of Wales from 1795 to 1820. The daughter of Charles William Ferdinand, Duke of Brunswick, and Princess Augusta of Great Britain, Caroline was engaged to her cousin George in 1794, despite their never having met. He was already illegally married to Maria Fitzherbert. George and Caroline married the following year but separated shortly after the birth of their only child, Princess Charlotte of Wales, in 1796. By 1806, rumours that Caroline had taken lovers and had an illegitimate child led to an investigation into her private life. The dignitaries who led the investigation concluded that there was "no foundation" to the rumours, but Caroline's access to her daughter was nonetheless restricted. In 1814, Caroline moved to Italy, where she employed Bartolomeo Pergami as a servant. Pergami soon became Caroline's closest companion, and it was widely assumed that they were lovers. In 1817, Caroline was devastated when Charlotte died in childbirth. She heard the news from a passing courier as George had refused to write and tell her. He was determined to divorce Caroline, and set up a second investigation to collect evidence of her adultery. In January 1820, George became King of the United Kingdom and Hanover. He insisted on a divorce from Caroline, which she refused. A legal divorce was possible but difficult to obtain. Caroline returned to Britain to assert her position as queen. She was wildly popular with the British people, who sympathised with her and despised the new king for his immoral behaviour. On the basis of the loose evidence collected against her, George attempted to divorce Caroline by introducing the Pains and Penalties Bill 1820 to Parliament, but he and the bill were so unpopular, and Caroline so popular with the masses, that it was withdrawn by the Liverpool ministry. The King barred Caroline from his coronation in July 1821. She fell ill in London and died three weeks later. Her funeral procession passed through London on its way to her native Braunschweig, where she was buried. 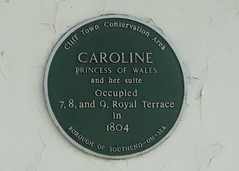 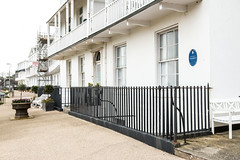 Caroline Princess of Wales and her suite Occupied 7, 8, and 9, Royal Terrace in 1804

Fortfield Terrace - No. 1 On 21st and 22nd May 1806, the Princess of Wales stayed with Lord and Lady Gwydir when they occupied this house before removing to "Old Hayes"

A bath beneath the paving and this wall are all that remain of Montague House, the home between 1801 and 1813, of the Princess of Wales, later to become Queen Caroline, wife of George IV.

Greenwich Park, near the Rangers House, Greenwich, London, United Kingdom where they lived (1801-1813)