Henry VI (6 December 1421 – 21 May 1471) was King of England and Lord of Ireland from 1422 to 1461 and again from 1470 to 1471, and disputed King of France from 1422 to 1453. The only child of Henry V, he succeeded to the English throne at the age of nine months upon his father's death, and succeeded to the French throne on the death of his maternal grandfather, Charles VI, shortly afterwards. Henry inherited the long-running Hundred Years' War (1337–1453), in which his uncle Charles VII contested his claim to the French throne. He is the only English monarch to have been also crowned King of France, in 1431. His early reign, when several people were ruling for him, saw the pinnacle of English power in France, but subsequent military, diplomatic, and economic problems had seriously endangered the English cause by the time Henry was declared fit to rule in 1437. He found his realm in a difficult position, faced with setbacks in France and divisions among the nobility at home. Unlike his father, Henry is described as timid, shy, passive, well-intentioned and averse to warfare and violence; he was also at times mentally unstable. His ineffective reign saw the gradual loss of the English lands in France. Partially in the hope of achieving peace, in 1445 Henry married Charles VII's niece, the ambitious and strong-willed Margaret of Anjou. The peace policy failed, leading to the murder of one of Henry's key advisers, William de la Pole, 1st Duke of Suffolk, and the war recommenced, with France taking the upper hand; by 1453, Calais was Henry's only remaining territory on the continent. As the situation in France worsened, there was a related increase in political instability in England. With Henry effectively unfit to rule, power was exercised by quarrelsome nobles, while factions and favourites encouraged the rise of disorder in the country. Regional magnates and soldiers returning from France formed and maintained increasing numbers of private armed retainers, with whom they fought one another, terrorized their neighbours, paralysed the courts, and dominated the government. Queen Margaret did not remain unpartisan and took advantage of the situation to make herself an effective power behind the throne. Amidst military disasters in France and a collapse of law and order in England, the Queen and her clique came under accusations, especially from Henry VI's increasingly popular cousin Richard, Duke of York, of misconduct of the war in France and misrule of the country. Starting in 1453, Henry had a series of mental breakdowns, and tensions mounted between Margaret and Richard of York over control of the incapacitated King's government and over the question of succession to the English throne. Civil war broke out in 1455, leading to a long period of dynastic conflict now known as the Wars of the Roses. Henry was deposed on 4 March 1461 by Richard's son, who took the throne as Edward IV. Despite Margaret continuing to lead a resistance to Edward, Henry was captured by Edward's forces in 1465 and imprisoned in the Tower of London. Henry was restored to the throne in 1470 but Edward retook power in 1471, killing Henry's only son and heir-apparent, Edward of Westminster, in battle and imprisoning Henry once again. Having "lost his wits, his two kingdoms and his only son", Henry died in the Tower during the night of 21 May, possibly killed on the orders of King Edward IV. He was buried at Chertsey Abbey, before being moved to Windsor Castle in 1484. Miracles were attributed to Henry after his death and he was informally regarded as a saint and martyr until the 16th century. He left a legacy of educational institutions, having founded Eton College, King's College, Cambridge, and (together with Henry Chichele) All Souls College, Oxford. Shakespeare wrote a trilogy of plays about his life, depicting him as weak-willed and easily influenced by his wife, Margaret. 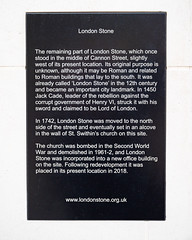 South Street, Exeter, United Kingdom where they entered the city

London Stone The remaining part of London Stone, which once stood in the middle of Cannon Street, slightly west of its present location. Its original purpose is unkown, although it may be Roman and related to Roman buildings that lay to the south. It was already called 'London Stone' in the 12th century and became an important city landmark. In 1450 Jack Cade, leader of the rebellion against the corrupt government of Henry VI, struck it with his sword and claimed to be Lord of London. In 1742, London Stone was moved to the north side of the street and eventually set in an alcove in the wall of St. Swithin's church on this site. The church was bombed in the Second World War and demolished in 1961-2, and London Stone was incorporated into a new office building on the site. Following redevelopement it was placed in its present location in 2018.

111 Cannon Street, London, United Kingdom where they was