Jerome David Kern (January 27, 1885 – November 11, 1945) was an American composer of musical theatre and popular music. One of the most important American theatre composers of the early 20th century, he wrote more than 700 songs, used in over 100 stage works, including such classics as "Ol' Man River", "Can't Help Lovin' Dat Man", "A Fine Romance", "Smoke Gets in Your Eyes", "All the Things You Are", "The Way You Look Tonight", "Long Ago (and Far Away)" and "Who?". He collaborated with many of the leading librettists and lyricists of his era, including George Grossmith Jr., Guy Bolton, P. G. Wodehouse, Otto Harbach, Oscar Hammerstein II, Dorothy Fields, Johnny Mercer, Ira Gershwin and E. Y. Harburg. A native New Yorker, Kern created dozens of Broadway musicals and Hollywood films in a career that lasted for more than four decades. His musical innovations, such as 4/4 dance rhythms and the employment of syncopation and jazz progressions, built on, rather than rejected, earlier musical theatre tradition. He and his collaborators also employed his melodies to further the action or develop characterization to a greater extent than in the other musicals of his day, creating the model for later musicals. Although dozens of Kern's musicals and musical films were hits, only Show Boat is now regularly revived. Songs from his other shows, however, are still frequently performed and adapted. Although Kern detested jazz arrangements of his songs, many have been adopted by jazz musicians to become standard tunes. 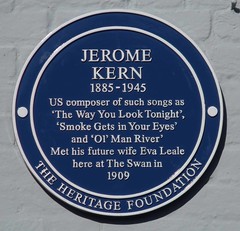