founder of the Virginia colony (1621)

William Claiborne also, spelled Cleyburne (c. 1600 – c. 1677) was an English pioneer, surveyor, and an early settler in the colonies/provinces of Virginia and Maryland and around the Chesapeake Bay. Claiborne became a wealthy planter, a trader, and a major figure in the politics of the colonies. He was a central figure in the disputes between the colonists of Virginia and the later settling of Maryland, partly because of his earlier trading post on Kent Island in the mid-way of the Chesapeake Bay, which provoked the first naval military battles in North American waters. Claiborne repeatedly attempted and failed to regain Kent Island from the Maryland Calverts, sometimes by force of arms, after its inclusion in the lands that were granted by a 1632 Royal Charter to the Calvert family (to Sir George Calvert, first Baron and Lord Baltimore, (1579-1632), by the reigning King of England, Charles I, (1600–1649, reigned 1625 to execution, 1649), thus becoming Maryland territory. Clayborne was an Anglican (William Claiborne was one of the signers, along with Virginia Governor John Pott, Samuel Matthews, and Roger Smyth, of a letter to the King's Privy Council, dated 30 November 1629, complaining that Lord Baltimore refused to take the Oath of Allegiance and Supremacy (Oath of Allegiance) to the Church of England), a Puritan sympathizer, and deeply resentful of the Calverts' Catholicism. He sided with Parliament, during the English Civil War, of 1642–1651 and was appointed to a commission charged with subduing and managing the, British colonies of, the Province of Virginia and Province of Maryland. He played a role in the submission of Virginia to parliamentary rule in this period. Following the restoration of the English monarchy in 1660, he retired from involvement in the politics of the Virginia colony. He died around 1677 at his plantation, "Romancoke", on Virginia's Pamunkey River. According to historian Robert Brenner, "William Claiborne may have been the most consistently influential politician in Virginia throughout the whole of the pre-Restoration period". 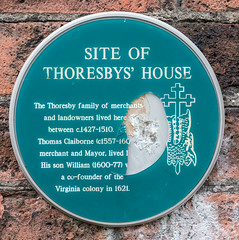