Harriet Martineau (; 12 June 1802 – 27 June 1876) was a British social theorist and Whig writer, often cited as the first female sociologist. Martineau wrote many books and a multitude of essays from a sociological, holistic, religious, domestic and, perhaps most controversially, feminine perspective. She also translated various works by Auguste Comte, and she earned enough to support herself entirely by her writing, a rare feat for a woman in the Victorian era. The young Princess Victoria enjoyed reading Martineau's publications. She invited Martineau to her coronation in 1838 — an event which Martineau described in great and amusing detail to her many readers. Martineau said of her own approach to writing: "when one studies a society, one must focus on all its aspects, including key political, religious, and social institutions". She believed a thorough societal analysis was necessary to understand women's status under men.The novelist Margaret Oliphant said "as a born lecturer and politician [Martineau] was less distinctively affected by her sex than perhaps any other, male or female, of her generation". 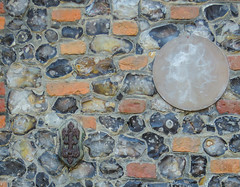 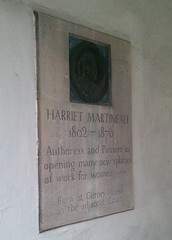 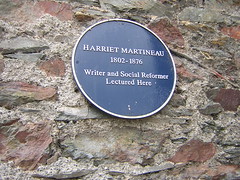 Earlham Hall The home of the Gurney family from 1786-1912. It was visited by their many friends including Amelia Opie, Harriet Martineau and William Wilberforce. The hall dates from c 1642.

Gurney House, Norwich, United Kingdom where they was born near (1802)